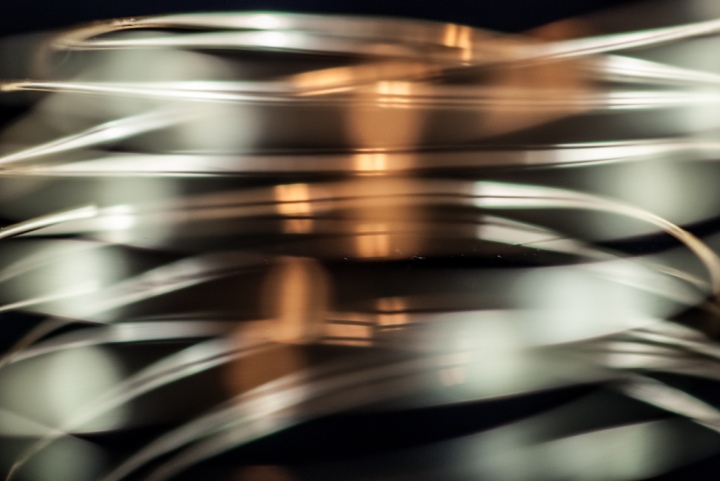 Saturday saw Daksha Patel’s ‘Noise + Signal’ come to the Cornerhouse in Manchester. It was a fascinating experiment in participatory, biosensed art. I chatted to Daksha before the project went live and took part later on, whilst in between I had the pleasure of watching her draw and of seeing the many participants get involved.

Daksha has an ongoing interest both in scientific, medical practices and visualization. Noise + Signal is an attempt at investigating this relationship and the title of the project is a reference to the negotiation, perception and interpretation required of medical professionals when bodily data is visualized, in order to establish ‘signal’ from ‘noise’. Although we might presume that the very many technological aids used in the medical world routinely present a kind of objective, concrete truth, faithfully rendering brains, bones, tissue, blood vessels and bodily electrical waves ‘as they really are’, in fact, scientific visualizations are situated, partial representations of the human body. Their deployment requires the careful training of would-be practitioners. Their normalized, aesthetic quality provides a shared space for both clinicians and patients to understand the otherwise invisible and mysterious internal workings of the body; bringing the inside outside. Moreover, they do not work in isolation, but are part of a great network of visual and practical performances that, together, combine to offer medical professionals assurances on the nature of a bodily illness, injury or condition. They are nothing more and nothing less than perceptive aids. X-rays, for example, cannot be taken as unerringly truthful (visual) objects, but must be coded in reference to patient questioning, prior knowledge(s), doctor-doctor discussion and direct bodily sensing (touch, sight etc.).

Daksha’s project, then, allows two particular insights to be explored. Firstly, through artistic representation, to question the fixity of the categories of ‘noise’ and ‘signal’ in biosensed data by taking them out of a strict, standardized medical arena. And secondly, through the tracing of a ‘live’ feed, to interrogate the interpretative practice of visualizing the body both through digital and analogue media. Practically, she achieves this courtesy of a number of technological devices and softwares. The resulting artwork is a product of these various mediations and modulations, tweaked in order adhere to these two explorative aims, and enhance their understanding.

Participants were first invited to wear a skin galvanometer. These tiny devices measure the electrical conductivity of the skin to gauge emotional responses. They are commonly used as part of polygraph tests, used to determine levels of arousal in response to questioning. In Daksha’s case, they were utilized in order to measure bodily responses to environmental stimuli. So for example, how the various spaces within the Cornerhouse affected participant’s arousal levels. Say, in how ordering a coffee, reading a magazine, staring out of the window onto the street, or talking to a friend on the phone variously stimulated the body. Fastened around the fingertips, the metal pads of the galvanometer attach to thin, white wires that snake down to a power-pack and circuit board hidden in a bumbag. Data is then transmitted from the device for further processing.

However, this is not the only biosensing technology incorporated into the project. Daksha also wears an electroencephalograph (EEG) headset that records electrical activity through the scalp. It, in essence, measures brain activity. In clinical use, the EEG is comprised of multiple electrodes attached all over the head. In Daksha’s case a commercial headset was used comprising of a single electrode attached to the forehead. Such headsets can be purchased for around £60-70, and are currently being marketed as educational, gaming tools for ‘brain training’ in much the same way that the Nintendo’s famous ‘Dr Kawashima’ series is. Of course, the main difference being that the headset directly measures brain activity and feeds this data back to the individual. It is an example of the ‘quantified self’ movement, typified in the consumer domain by fitness applications like Nike+ FuelBand, Runtastic and RunKeeper. In each case the user’s movements, speed and heart rate are all monitored in order for individuals to train, measure and motivate effectively and accurately. But the critical element of Noise + Signal is that the skin galvanometer readings coming from the participants are mediated by Daksha’s EEG responses. The measurements are then routed to a specially coded piece of desktop software ready to be prepared for the final visual stage.

The next step involves converting this otherwise continuous stream of bodily response data from (mere) code to something perhaps more aesthetically pleasing, and also more commonly interpretable. The desktop computer is connected to a digital projector showing any images onto the white walls of the exhibition room – the Annex. As a backdrop to the resulting visualizations, Daksha has used an architectural blueprint or ‘base map’ to shape the pulse and flow of the data. As responses flash up onto the projected surface they mould, drip and slide along some classic architectural forms. For example, in such drawings, doors are represented by the arced movement they create. Other features such as walls and windows are also represented in their own unique ways, further providing a kind of spatial structure to the otherwise abstract data. In fact, EEG readings are usually displayed in a simple linear format flowing from left to right (search for ‘EEG’ on any image engine for evidence). In routing this data to a building plan, Daksha has married the environmentally-attuned nature of the readings with the visual form – providing a contextual landscape for both herself and observers. As a result, the flashes and flows that project onto the wall of the Cornerhouse Annex come to life as tracings of everyday, human movement.

Although visually stimulating, the constant pulses fed through the software and projected onto the wall are not stored; do not leave a residue, and cannot be replayed. They are otherwise lost remnants of ongoing action. However, and this is the central point of the project, Daksha responds to these flashes of white light and marks onto an overlain surface (of transparent, tracing paper-style material) with a marker pen. As multiple lines and traces take over the canvas, Daksha has to react quickly. Even then, the flow of data is too agile and too unpredictable to be able to capture and log every movement. Some provide more enchanting inscriptions than others, too. The wide, repetitive arcs along the multiple door openings of the architectural base map look intriguing. Diagonal bolts that span the width of the material appear out of nowhere, and long, lava-like responses ooze down the wall. Even in the transitional period between participants, when the skin galvanometer is being re-attached, thanks to Daksha’s EEG headset, the data keeps on flowing.

Each time an individual took part it was possible to register and code their responses. Some took phone calls that stimulated the mind; the flows were long, slow and continuous. Easy to draw. Others used the time to rest and contemplate; the visuals sped up and provided scant opportunity for Daksha to capture and draw. My own experience was split between three endeavors. Firstly, I took to the bookshop. I scanned the shelves for something of interest and found the Secret Footballer Book. I flicked through a couple of the pages, a little more conscious of my being than usual. I knew the bookshop attendant was aware of the experiment and that she had been told to expect people wearing this strange apparatus. I then took to the art, architecture and music magazines on the other side. I picked up a copy of Wire. I stroked a couple more of the thick, expensive titles. I then left, only to catch a copy of another thick, matte magazine out of the corner of my eye. A photograph of the bold, bright Mecanoo-designed Library of Birmingham on the cover drew my attention.

I then returned to the bookshop and leafed carefully through the rather cumbersome pages, perusing the headline story. Then I set off again, making my way to the ground floor cafe area. I toyed with sitting by the window but instead chose to sit with my back to the central wall, side on, facing a large part of the space. Four friends were sat on a table to my left – they sounded like they were from out of town – and another two to my right on another small, round table. I was perched on a bench seat casually flicking through the Cornerhouse film guide. Again, I took little notice of the detail within, choosing instead to remain attentive to the environment. I began to feel the tiny pulses feeding through the metal pads attached to my fingertips. I took a couple of pictures of them as evidence of their form (see below). 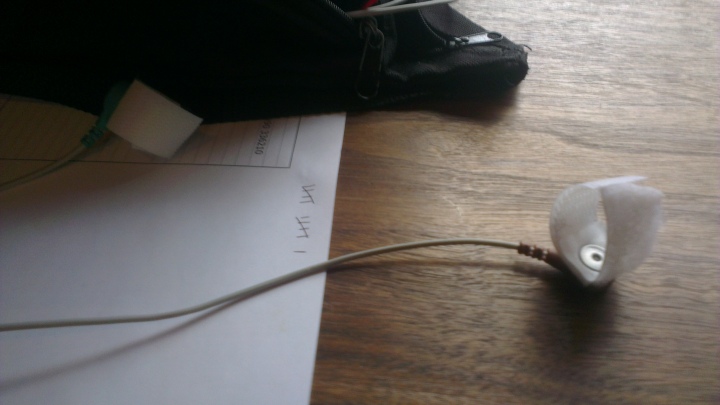 I then moved to the window, where there is a row of stools perched underneath a long, wooden top. I still sat in earshot of the first group of friends, listening to them talk about booking train tickets on their phones. One mentioned the popular ‘trainline’ application. Another claimed they rarely used theirs for anything other than calls. I panned across the view in front of me. The window looks out onto Oxford Road. The iconic and imposing Palace Hotel stands across the road. There is a steady stream of people, cars, bikes and buses going both ways. Inside, the cafe is quiet. It is lunchtime and I feel hungry. I then return to the Annex having estimated that I’ve probably expended my allotted time with the device. I unwrap the velcro from my fingers, unclip the bumbag from my waist, and hand the equipment back to the gallery assistant. Daksha then proceeds to explain my data readings to me, suggesting that my ‘zen-like state’ proved difficult for her to capture. I tell her my time was spent reading, listening to adjacent conversation, and contemplating the outside world.

Noise + Signal is a wonderful exploration of the body, resultant biodata, scientific knowledge, artistic interpretation and digital sensing and visualization. It provided the space for thinking about the rise of the quantified self and the shift of technologies from the clinical sphere to the public arena. Other recent work by Daksha along similar lines include Fat Drawing (2013); commissioned for MOSI’s Brains: The Mind as Matter in which goose fat was employed to create an evolving, seeping and flowing image of the brain, and Route Map (2010); shown as part of Abandon Normal Devices and Daksha’s residency at the Christie Hospital. Her reinterpretation of Manchester’s road, rail and river routes as ‘angiograms’ or blood vessel x-rays literally re-casts them as ‘arterial’ routes.

Thanks, of course, are extended to Daksha herself for giving up her time before the exhibition to talk to me.

You can find out more on her work at dakshapatel.co.uk.

One thought on “Noise + Signal”