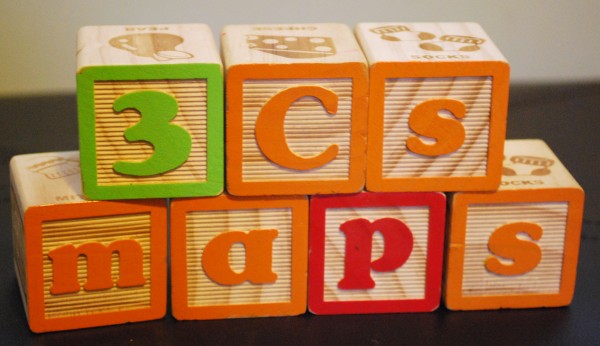 The Counter Cartographies Collective (colloquially known as ‘3Cs’) have a new piece in ACME: An International E-Journal for Critical Geographies (freely available to download). It’s part of a theme issue on ‘Anarchist and Autonomous Marxist Geographies’.

Much of the 3Cs work is inspired by Deleuze’s comments on mapping:

Run lines, never plot a point! Speed turns the point into a line! Be quick, even when standing still! Line of chance, line of hips, line of flight…Make maps, not photos or drawings. (Deleuze and Guattari 2004 [1980]: 27)

Their form of ‘autonomous cartography’ is intended to  discover new political and geographical horizons – challenging existing representations of everyday spaces. Most of this work has come in the form of some fantastically rich campus maps of UNC-Chapel Hill where the 3Cs is based. These maps have aimed to contest the way in which the university is positioned as an ‘ivory tower’ and an elitist institution, and also to make connections between the many different people who live and work on the campus itself.

The partial cancellation of the annual Labour Day holiday by the UNC administration (2005) brought the collective together, however unknowingly at that point. In the article, they say that they ‘were frustrated with the continual talk among activist scholars on campus about their own geographically disparate interests’ (450) and wanted to instead provide an opportunity for all staff (research, support, maintenance, catering) and students (UG, PG, part-time, full-time) to provoke collective discussion on the ways in which the UNC-Chapel Hill campus was organized. It was a process of exploration and reflection, getting passers-by to fill in questionnaires, draw maps and participate in interviews on their work experiences (450).

These events were, in their words, kinds of situated ‘drifts’ or dérives intentionally and awkwardly straddling the divide between protest and research, confusing enough for those who approached them (450). One of the main aims of this initial Labour Day event was to discover the extent of precarious labour at UNC-Chapel Hill. That is, the number of people in temporary, insecure, or piecemeal employment. Research staff, catering assistants, short-term lecturers etc. anyone who might otherwise be unable to participate in organized labour protests.

They drew inspiration from a Spanish feminist group Precarias a la Deriva (Precarious Women Adrift – an introduction to their initiative is here) – an organization who visit sites of precarious labour (domestic, self-employed, per-hour) and ‘picket-survey’ (446) women with the question; ‘what is your strike?’ in order to help connect those at the fringes of the labour market. The 3Cs evoked these attempts at involving the precariously employed in the art of collective protest on their own university campus.

Other projects followed. The DisOrientation guide – a collaboratively mapped tool for campus activism – was borne out of the Labour Day event and, according to the article, was distributed to students, through activist networks, in undergraduate classes, and local community centres (455), helping people to understand the complex nature of UNC-Chapel Hill, the jobs people undertake, and the spaces they create (versions 1.0 and 2.0 downloadable here). Moreover, to encourage people to imagine an alternative university campus aside from universalized, sanitized or hegemonic understandings.

In the 3Cs own words:

By producing maps as militant research, autonomous cartography constitutes a conceptual framework for understanding and creating geographic and political change in the post-Fordist economy. This work is premised on the idea that geographic knowledge and spatial innovation are created from movements and people engaged in struggle, thus giving rise to autonomous politics within the collective. 3Cs’ experiences with autonomous cartography illustrate how mapping can function as a form of militant research, producing new knowledges and subjectivities, while also investigating and instigating political change. The mapping process itself enacts a different form of knowledge production that creates new social relations and geographies. (461)

Whilst it may be a truism amongst critical cartographers that maps are political, it still remains difficult to provide empirical evidence for their use – let alone production – in specific circumstances. The work of the 3Cs gifts those working at the intersection of mapping and political action (myself included) some very real examples of how best to proceed in using mapping as a potentially empowering tool for knowledge production, spatial imagination, self-awareness and political change.