Back in February I posted an article I wrote for Novara Wire on protest mapping. In it I mentioned I had a forthcoming article in a themed issue of Media Fields on ‘Spaces of Protest’. Since I mentioned it the issue is now live. The full version is now on my ‘selected publications’ page. Please reference as normal. . Needless to say, I’m looking forward to the other contributions.

In short the paper is on ‘the art of playful disruption’, and attempts to draw some connections between Situationism and recent playful, urban protest events involving ‘maps, kettles and inflatable cobblestones’. I argue that these are ‘urban embodiments of jouissance, playful articulations of political matters’.

I make this case with reference to Alice Becker-Ho and Guy Debord’s A Game of War (1987) strategy game – something I’ve mentioned briefly on this blog before, in November 2013. Rather than go over (once again) some of the classics of Situationism, I’ve drawn on A Game of War because, as I’ve suggested in the article, it ‘was the closest any Situationist work had got to actually devising a practically and tactically useful guide to territorial engagement’. That it did so via the medium of a board game is ‘testament to the movement’s enduring playfulness’.

Two case studies testify to this continuing sensibility. One concerns a smartphone app created by student activists in London in 2010, another centres on the design of so-called ‘inflatable cobblestones’ by the Eclectic Electric Collective (now Tools for Action). Again, I’ve mentioned both previously: here and here (in relation to the Disobedient Objects exhibition). Needless to say I find both quite wonderful examples of what Graham St. John (2008: 172) has called ‘carnivalesque hacking’, i.e. a way to ‘provide creative possibilities’ to ‘deliberately danger the smooth running’ of otherwise sanitized and restricted protest events.

The cobblestone of course has deep links to urban revolt, and specifically to Situationist rebellion, echoed in the famous evocative call of “Sous les pavés, la plage!” (“Under the cobblestones, the beach”). The design of glossy, enlarged, inflatable cobblestones for the purposes of contemporary protest gestures towards this history, but also subverts it in its obvious fragility. As police officers – disarmed by the frivolity an inflatable object brings to a protest demonstration – attack, deflate and confiscate the cumbersome objects it mocks and ridicules them. Watching a police officer attempting to attack an inflatable with a weapon is, well, rather funny, if not wholly farcical. Thus laying bare the unnecessary force of the state for all to see. Each example ‘depends on the successful mobilization of ludic action’. In other words, on the ‘playful articulation of political matters’.

An exciting looking programme for the upcoming #DigitalActivismNow conference at KCL on April 4th. The closing plenary will be given by Gabriella Coleman and is entitled ‘Weapons of the Geeks’. There are 4 panels across the day: 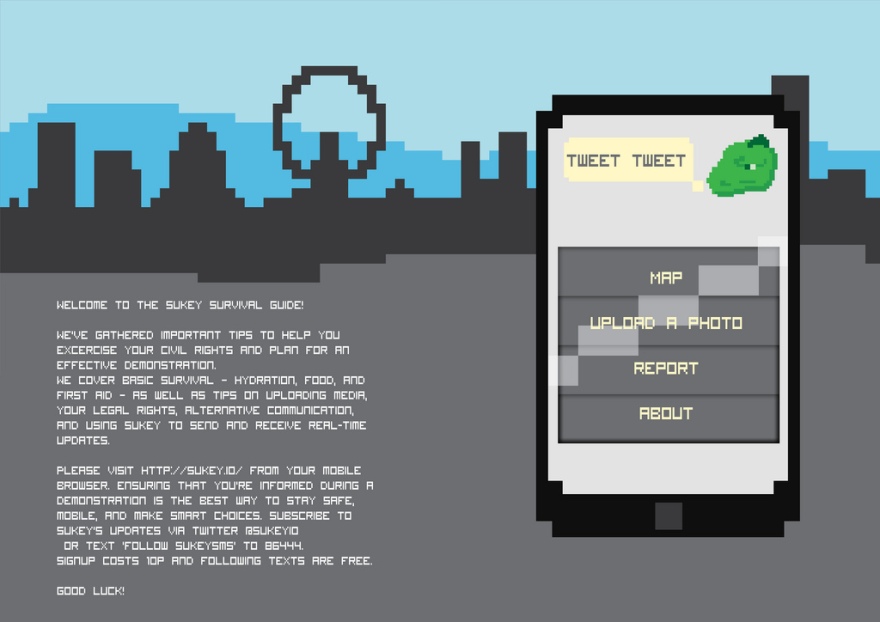 Yesterday I intended to follow up my first post on ‘march dynamics’ with a second on the ‘gamification of protest’. I ended up reading the whole of the fantastic Endres and Senda-Cook (2011) paper, posting a short comment on it, and failing to even consider my second theme of protest and play! Anyway I shall say a few words now.

Following on from Wednesday’s somewhat bodged NUS march, Samuel Carlisle of the protest application Sukey posted a few interesting discussions over on his soundcloud page, here. The first of interest was entitled ‘Gamifying Volunteer Participation’ where Sam talks of auto-assigning roles to online volunteers. This basically means that anyone who’s willing to help out but isn’t at the live demo, can assist in completing lots of little tasks (meta-tagging photos, adding users to the ‘whitelist’, finding trolls to add to the blacklist, mapping facilities etc.) in a service called freenode, an open-source network that helps Sukey distribute these kinds of jobs to eager volunteers. Now, the only problem Sam found with this distributed tasking is that people aren’t always proactive in getting started on a job, whilst nonetheless wanting to help in some way because they feel like they have a particular skill, or specific experience of doing a certain job. So, says Sam, how do you get these people involved? This is where the gamification element comes in, because if people get rewarded for their work they tend to want to continue doing that work, so with the assigning of particular roles (‘tagger’, ‘whitelister’, blacklister’, ‘mapper’ etc.) each group have clearly defined divisions (tag division, whitelist division etc.). This ‘gamification’ dynamic can help in engaging far more people in the application’s workflow, and ultimately, in increasing the efficacy of the Sukey project.

The second clip; ‘Dynamic Random Role Assignment’ discussed bringing this kind of gamified interaction out onto the ground, so that protesters during a demo could, perhaps, be given a specific task to do based on their geographical location. So they mention what Sam calls ‘pseudo-leadership’, although I really want to call it ‘fleadership’ (fleeting-leadership!), where protesters are given a specific, momentary command (‘start chant’, ‘speed up crowd’, ‘direct to X’ etc.). It’s a kind of distributed leadership role that allows protesters to sink back into anonymity once their job is complete (back into ‘civilian mode’ as Sam points out); only to pick it up again should they be called into action. Moreover it allows people who maybe don’t even know each other to coalesce around a set of shared objectives (i.e. on the Sukey platform). Of course, this is presuming the crowd’s a) big enough and b) willing enough to recycle roles. But they’re interesting tactical points nonetheless.

The final discussion, ‘The Art of Gamification for Protest’ follows on from the nascent gamification concepts Sam talks about in clip 1 and 2. It tries to make sense of these gamified elements and suggests splitting online roles into predefined temporal tasks, so that those with a particularly long block of continuous time (a weekend) can do a specific job, whereas those with interstitial but consistent blocks (weeknights, lunch breaks) are assigned others. In other words: “little missions that fit their schedules”. The importance though still lies on it being a ‘fun’ and playful practice, so its about giving users/protesters the choice to engage in certain tasks in order to then reward their involvement (and it not be conceived as a job in the purely work-as-forced-to sense). A way of heightening participation and increasing involvement, enjoyment and togetherness leading up to, and during a protest.

Also: The picture above is taken from Sukey’s Survival Guide for protesters, which is on flickr here and on the Sukey website, here. If you click the image you can also download it as a PDF directly. 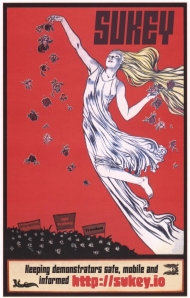 Saturday saw the TUC ‘A Future That Works‘ march in London, and estimates suggest 150,000 people took to the streets (see here). Ed Miliband and others spoke at the Hyde Park rally which was hosted by James Smith (or, Glenn Cullen from The Thick of It!)

Protest marches are invariably tiring affairs. My calves are still aching from walking round London all day, and my head hurts from trying to extract data from Twitter, which I can assure you is not an easy process. The ‘anti-kettling’ mobile web app, Sukey (version 3.0) was running during the day, providing a reliable and informative account of proceedings. I’m trying my best to collate hashtagged tweets (‘#sukey’ ‘#oct20’ etc.) and updates from key accounts (@sukeyio, @OccupyLondon etc.) to help with tracking the action. I’ve also saved all the re-tweeted and verified images of incidents during the demonstrations across London and hope to make use of them somehow. Sukey should be launching a corresponding desktop web app in the next few days. The overall aim is to connect those inside demonstrations with those outside, by crowdsourcing ‘micro-tasks’ (like Amazon Mechanical Turk, they say) and enrolling others in small but crucial jobs (tagging photos, linking tweets etc.).